A guide to control technology with Quantum Marine Stabilizers

A guide to control technology with Quantum Marine Stabilizers

For many in the industry, the substantial advancements in control technology over the last two decades have not gone unnoticed. These changes are perhaps most obvious from a design perspective, and particular improvements can be identified both in the hydrodynamic designs of fins and rotors and in the development of intelligent control systems that harness the latest technological and scientific developments (such as computational fluid dynamics).

The experts at Quantum Marine Stabilizers have engineered and manufactured marine stabiliser systems for over thirty years and have revolutionised the marine industry by creating unprecedented roll control for maximum comfort both at anchor and underway. The success of this increasingly intelligent technology will soon be seen on board the 70-metre Benetti motor yacht Freedom, which will feature the first-ever Dyna-Foil™ stabilisation system from Quantum once she emerges from her year-long refit works which are being carried out in the US and set for completion at the end of 2019. The patented Dyna-Foil™ offers a fully retractable system, ideal for zero, medium and high-speed demands. Those who use Quantum products, like superyacht Freedom, have direct access to a qualified Quantum technician who can assist and run diagnostics through a stabiliser network and dedicated VPN to promptly resolve any technical issue. 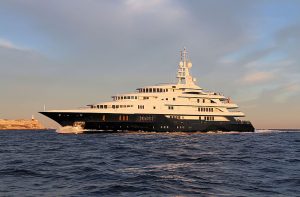 To find out more, we speak to the experts at Quantum Marine Stabilizers, to gain a full understanding of control technology and to learn more about the incredible evolution which Quantum’s controls have undergone in recent years.

What is control technology?


The controls can be seen as the “brains” or proprietary algorithm that enables guests, owners and crew to benefit from increased stability at sea by automatically sensing changes in the vessel’s motion and sending real-time and adaptive signals to the stabiliser system. This data is then used by the stabiliser system, along with Quantum’s proprietary software, in order to determine and direct the optimal fin activity to reduce the vessel’s roll.

There are many factors which can influence the commands or movement directives sent to the stabiliser system, including wave pattern, vessel speed, roll period, metacentric height (GM, or the measurement of the initial static stability of a floating body), gross tonnage and the hull design or profile of the yacht. Each stabiliser control package includes a main control and interface, a local control module and a roll sensor.

Which systems can use Quantum’s controls?

To optimise this roll control/damping, the stabiliser controllers need to be configured for the type of system, and the intended function, as well as the characteristics and requirements of each individual yacht. Quantum’s controls can be configured for a wide variety of stabiliser systems including Underway and Zero Speed™, Conventional and XT™ Fins, MAGLift™ Rotors, Dyna- Foil™ Retractables. 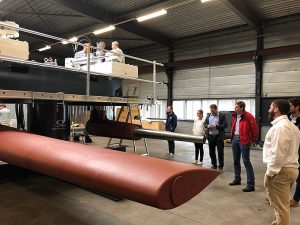 Beginning with the ARC3000 (Adaptive Roll Control), this first ‘conventional’ control was designed by Quantum for use by underway fin stabilisation only and is ideally suited for basic retrofits and military applications. It consists of a single unit which houses the main control circuitry and the operator interface and is compact, simple and rugged in its design, with traditional push-buttons and knobs on the controller that provide direct and immediate feedback on the overall system’s condition and performance.

For optimal ease of access, the control head is mounted in the bridge, with an LED display for fin activity and a dimmable display ideal for navigation at night. The ARC3000 control programme can be operated both automatically and manually and collects roll motion data and immediately initiates feedback to produce a corrective response. 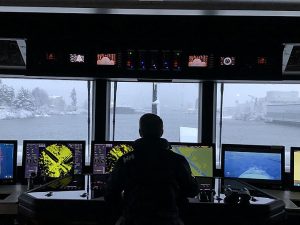 As the enhanced version of the ARC3000, the ARC3001 controller was specifically designed for use by fin stabilisers with Zero Speed™ capabilities. 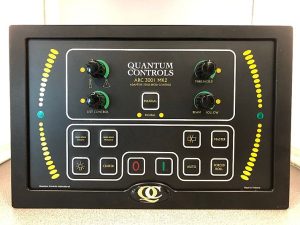 For Quantum Marine, the importance of digital technology lead to the creation of the SMC4000 – the company’s technologically advanced and most popular model to date. These SMC (Ship Motion Control) stabiliser controls consist of a control box, control boards and circuitry and a touch-screen operator interface.

This model is perfectly designed for underway and Zero Speed™ stabilisation, as the algorithms can use the necessary parameters to rapidly comprehend vessel roll motions and initiate a response to optimise roll reduction. 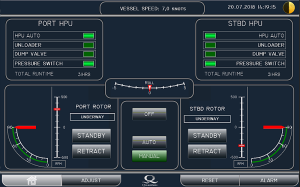 The SMC4000 can be integrated with the ship’s glass bridge and offers a touch-screen panel with an HMI (Human Machine Interface) control that can be completely blacked out to minimise disturbances during night operations. The control collects the ship’s speed and data through the NMEA 0183 interface and the ship motion control system functioning via ethernet. In addition, the control box and operator touch-screen can be installed separately for maximum flexibility and convenience, with the control box not needing to be installed on the bridge.

In control systems such as Quantum’s, the output from the main stabiliser control is directed to a nearby local control module which compares the activities of its corresponding stabiliser unit with what is required by the main control, thus ensuring deviations are corrected rapidly. Quantum offers three different types of local control modules:


This conventional, analogue local control module requires minimal or no user interaction and is designed to automatically accommodate for any activity. An older model from Quantum, it still remains a popular choice for naval vessels. 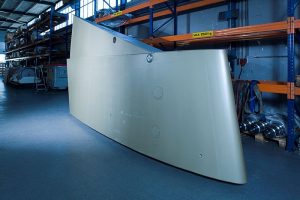 Although it performs the same functions as the FCM, the ECM offers increased processing power and can integrate more parameters and various other options including a local display, ethernet connectivity and a glass bridge integration. The ECM allows the captain or engineer to check the system’s status, including the fin angle, and receive alerts for any functional changes which fall beyond the assigned parameters. 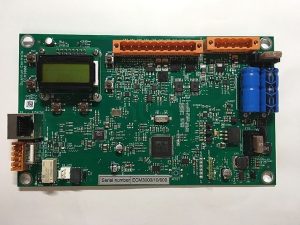 This module uses the functionality of the ECM unit but is specifically designed for the MAGLift™ Rotor and benefits from an impressive HMI interface, graphics and screen size.

The benefits of intelligent control

In short, the development and increasing intelligence of these innovative control technologies in recent years have greatly enhanced the capabilities and effectiveness of Quantum’s stabiliser systems. Both the main and local controls can be seen as the “brains” behind the functionality of the control system, thus enabling owners, guests and crew alike to enjoy the benefits of exceptional stability at sea.

To find out more about Quantum Marine Stabilizers and the services they offer, give WATMAR a quick call.